As we approach election season in the fall, with the primary on September 13 and the general election on November 8, 2022, we will have several meetings devoted to hearing from and asking questions to candidates running for office.  Note that it is PARC’s position not to endorse any candidate prior to the primary election.  We want a fair and balanced process.

Dean Poirier is running for the US Congress and is a veteran of the US Army who served during the “Desert Storm” & “Provide Promise” time frame. He participated in the Build-up and training for Desert storm. Dean had the honor of serving in the Humanitarian Aid missions “Provide Comfort” & “Provide Promise”, while stationed in Germany.  Dean has ideas for needed changes to the VA and VA medical system that will save the American taxpayers billions, and ideas for changes for other areas that will do the same in those areas.
Dean says; if we do not put someone in the office that has the personality, demeanor, and willingness to fight for our rights, & freedoms, and the rights and freedoms of our children and grandchildren, then we & they will lose the America we love!
“I” Am that person willing to Fight for YOU!!

George Hansel is also running for the US Congress and is a 5th generation executive of a local family-run manufacturing company and the Mayor of Keene, New Hampshire. For over 120 years, his family’s manufacturing company has been creating jobs and American made products sold across the world. After many years serving on community boards, George was elected to be the 49th Mayor of the City of Keene, New Hampshire in 2019. He’s currently serving his second term after being re-elected with 91% of the vote.
Under George’s leadership, Keene has passed balanced budgets and implemented fiscally responsible policies to cut Keene’s debt service payments in half.  George believes elected officials have a duty to make themselves accessible to their constituents. As Mayor, he has a track record of listening to the citizens of New Hampshire by hosting town halls, meetings, and even a weekly call-in radio show on WKBK.

Each candidate will have 30 minutes to tell us why they’re the best person for the job. There will be time for questions.

We are hosting a special summer garden party on August 21, 2022 to meet the candidates.  Candidates for both state and national offices have been invited and we’ll update this post as we get confirmations.

Pleasant View Farm BnB & Tavern in Bristol NH will be our hosts.

As we approach election season in the fall, with the primary on September 13 and the general election on November 8, 2022, we will have several meetings devoted to hearing from and asking questions to candidates running for office.  Note that it is PARC’s position not to endorse any candidate prior to the primary election.  We want a fair and balanced process.

So, on August 11, 2022, we are pleased to hear from two candidates. Lily Tang Williams and Bob Burns who are candidates for the United States House trying to unseat Annie Kuster

Each candidate will have 30 minutes to tell us why they’re the best person for the job. There will be time for questions.

THE FIX WAS IN

The 2020 presidential election was rife with fraud orchestrated by the Democratic Party. That’s not just an accusation; it’s now, thanks to bestselling author and investigative journalist Dinesh D’Souza, an established fact. With eyewitness testimony and the pinpoint precision and analytic sophistication of the forensic technique of geotracking, D’Souza demonstrates how an already corrupt system put in place by Democratic Party hacks and “community organizers” was taken over and supercharged by national-level operatives to produce massive voter fraud.

The key figure: the mule. A paid cut-out. A criminal deliveryman. The stooge found at the intersection where election cheating and double-dealing hit the road. The mule is the crook who physically takes a sack of ballots provided by shady NGOs and political machines—the “community activist organizations” made famous by former President Obama, for instance—and, like some nefarious Johnny Appleseed, dumps those ballots in collection boxes throughout a voting district. Do enough of this, and you have planted voter fraud across a nation.

Documentary filmmaker extraordinaire and bestselling author of America, Death of a Nation, and United States of Socialism, Dinesh D’Souza exposes powerful evidence of the colossal voting racketeering that you were told didn’t exist. Here you will find the receipts—the transcripts and confirmatory details—for the facts establishing 2020 election fraud presented in D’Souza’s major motion picture documentary, 2,000 Mules. D’Souza makes a powerful argument that 2020 was a stolen election. More important, D’Souza proves it. 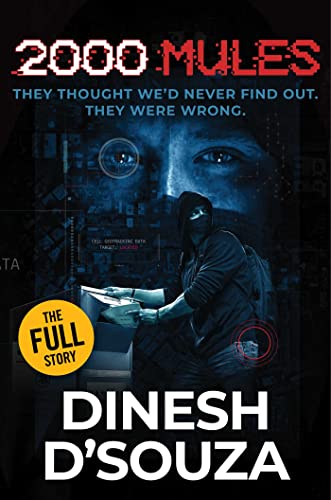 Parental Bill of Rights defeated by these NH House “Republicans”

The following 13 Republicans voted against the bill, and one other was present but did not vote.

Among other things, the Bill provided that parents had…